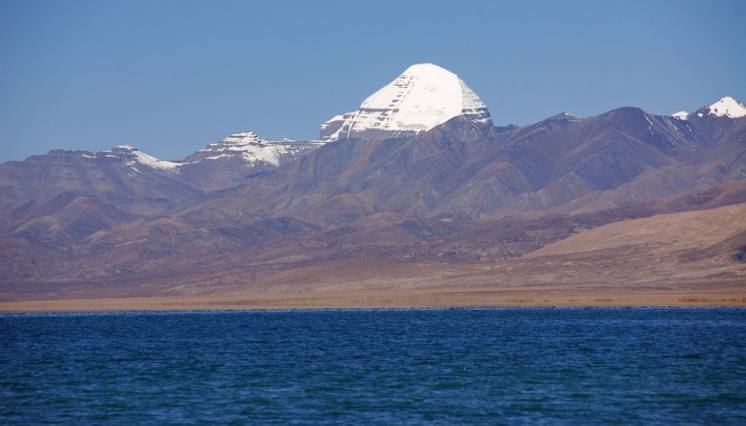 Manasarovar Lake lies in western Tibet, 940 kilometers from central Tibet, Lhasa. The altitude of lake is 4590 miter from sea level. It is relatively round in the shape with the circumference of 88 kilometers and 90 miters depth. This is one of the largest fresh water Lake in Tibet. To the west of Manasarovar lies Rakshas Tal and to the north mount Kailash.  It has different name as Yumtso from Local Tibetan language. The name Manasarovar is from Sanskrit, which is combination of two words Manasa and Sarovar. Manas mean mind and Sarovar mean Lake. According to Hindu religion, Manasarovar Lake was created in the mind of Lord Bhrahma. Manasarovar is source of four big rivers of Asia. Brahmaputra River, Sutlej, Sindhu and Ghaghara.

Manasarovar Lake believed to be as Holy Lake in the world. In Hindusm, it is an image of Purity and one who drinks water from Lake will go to resident of Shiva after death.  In bon religion, it is also associates as holy place. The founder of Bon religion washed himself in Lake Manasarovar at his first time visiting of Tibet. Buddha stayed and meditated near this lake on several occasion as per Buddhism and Tibetan tradition is to meditate near at Lake Manasarovar. There are lots of monasteries build around Manasarovar by Buddhist. Similarly Lake Manasarovar is important for Jainism.

Lake Manasarovar is the place of Pilgrimage. Thousands of pilgrimage peoples visit Lake Manasarovar every year. Their main purpose is to take holy bath and deep in Lake. Most of them are from Tibet, India, Nepal and other neighboring countries. Pilgrimage peoples mostly enter from Nepal as Kailash Mansarovar Tour by overland. Peoples also enter here from Lhasa as Lhasa Kailash Tour and Kailash Tour by Helicopter. The good season to be here is from May and till September every year. Local government has given permission to build some guest houses at bank of the Lake, which are accommodating visitors.

You can view information regarding Kailash and Mansarovar from following links.