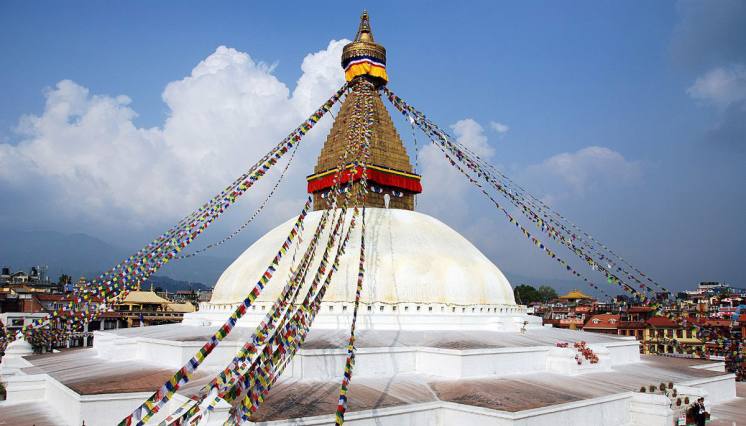 Boudhanath is the largest spherical stupa in Nepal, located in Boudha, in eastern about 11 km (6.8 mi) from the center and northeastern outskirts of Kathmandu. Boudha was name after the establishment of Boudhanath stupa.  As of 1979, Boudhanath is a UNESCO World Heritage Site. Along with Swayambhunath, it is one of the most popular tourist sites in the Kathmandu area. Surrounded by hills, Boudhanath Stupa is a jewel point in the center of a natural mandala, a store of scared energy. It is the center of Tibetan culture in Kathmandu and rich in Buddhist symbolism.

The stupa was one of the famous trade route from Tibet to enter Kathmandu Valley by the village of Sankhu ( one of the famous holy place for Hindus). Tibetan merchants have rested and offered prayers here for many centuries. When refugees entered Nepal from Tibet in the 1950s, many decided to live around Boudhanath. There are many Tibetans living in around Boudhanath and Boudha at present. The splendid dome of Budhanath stupa is approximately 120ft in diameter and 43m in height. The square tower is topped by a pyramid with 13 steps, representing the ladder to enlightenment. Prayer flags tied to the stupa flutter in the wind, carrying mantras and prayers heavenward. A thick layer of whitewash cats the dome and the form of a double lotus depicted in saffron water colors it. Beneath the dome, is an added terrace with a remarkable 108 niches filled with stone sculpture. And on the base of the stupa, contains of three large circular platforms in descending order which symbolizes the earth. You can look around from there while listening to the chants of the devout doing kora, walking around the stupa praying. Doing Kora in clockwise direction turning the Mani wheels fixed in the surrounding wall and reciting mantras of the deity of compassion,  usually preceded and concluded in prayer to the three jewels and is said to be most effective at dawn or dusk. The 10th, 15th and final day of lunar month and ups various specific auspicious festival days. It is during these occasions the Boudhanath is said to be truly alive. 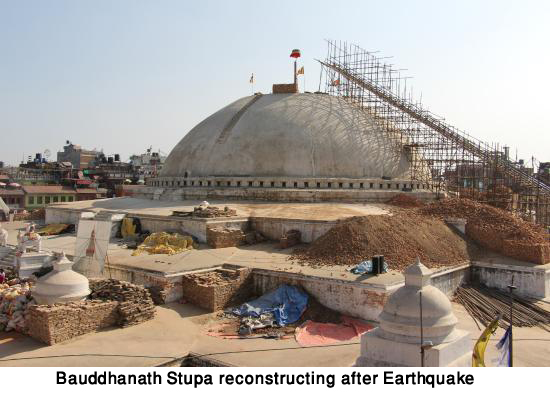 There are many stories and legends about the origin of the stupa. However according to “Hidden Treasure of the Guru Padmasambhava”, a very poor poultry keeper widow named  Ma Jhyazima aspired to make a great offering of the Boudha requested for the land to local king for permission and it was granted. This mere woman’s ambition to build such a magnificent monument offering to the Boudha caused much jealousy between the rich and powerful at the time. The jealous lord petitioned the king to stop the construction but the king who had already given permission replied “Since permission to build has been given, it shall not be rescinded.” The women passed away after completing the base or dome like structure. And her four sons completed the rest of the stupa, they all stood infront of the stupa and prayed for their wish. They all had different wish and all their wishes were really fulfilled in their next life. You can search the whole story about this and read in internet. Later on the stupa was renovated by different kings in their period and now at present.

Boudhanath is mostly regarded as for wish full filling. There are many true stories of peoples from different countries doing Kora and making a wish, they have really succeeded in their wish. When you see the stupa for the first time whatever you pray for, it will be succeed.  When you are interested to visit Nepal, don’t forget to visit Boudhanath Stupa. It’s close about 3 km from Tribhuwan International Airport, Kathmandu.  You can contact to Touch Kailash Travels and Tours for making your visit more efficient, comfortable and mesmerizing. We can arrange wonderful tours and sightseeing all over Nepal along with Tibet, Bhutan, and India as per clients needs.